Welcome to the first post in our new Ask WP Tasty series!

We get great questions from customers all the time, and we want to share our answers with you, our loyal readers. These Ask WP Tasty posts will be short, easy-to-read snippets that answer a specific question about recipe SEO, Pinterest optimization, affiliate income, and more. 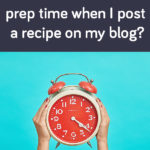 I understand why including some info, such as nutritional data, in a recipe would be of interest and beneficial to some people. But I find many times that preparation times are misleading, so I never give an overall time frame. Everyone preps at a different pace based on their skills and other outside factors (door bell, phone rings).

I always explain in the body of my blog post about steps to prep, but I don’t say exactly how long it will take. I wouldn’t want to think a reader can prep in the same amount of time I do.

I just can’t see why a recipe would be penalized for not including a bit of data that’s very ambiguous.

Let’s break it down!

Should you include prep times, even if they’re a bit ambiguous? ⏲️

For what it’s worth, I totally agree with this sentiment. I’m a pretty slow cook and I always have to calculate my own estimated prep time based on the recipe instructions. I generally move through recipes at about the same pace as a turtle. 🐢

Will I be penalized by Google for not including prep times in my recipes?

Recipes aren’t penalized, per se, for not including prep and cook times. Structured data isn’t actually even considered a true ranking factor for search.

However, the more info users are presented, the more likely they are to click through. Recipes with no rich results have a much more difficult time ranking because they don’t get users to click through as often.

If you have everything else but the prep time, it may not make much of a difference, but that prep time may be the one thing that causes someone to click through to your recipe and not someone else’s. It’s difficult to know, so in this case, I usually recommend including more data when you can just in case it helps a little bit. 👍