We’re in the middle of an ongoing case study where we’re trying out new ideas and finding ways to increase traffic from Pinterest using Pinch of Yum’s Pinterest account to test our theories along the way. This is the update looking back at January, 2019. You can check out all the posts in the series here, sign up on our email list to get future updates, or just keep reading to find out what we learned in January. 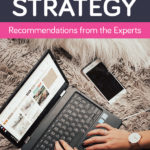 Welcome back to our Pinterest Case Study series! This series takes a deep look into recommended Pinterest marketing practices and how implementing them impacts traffic from Pinterest.

Back in January, we documented the start of this series with our intentions, goals, and the players involved.

Pinterest marketing can sometimes feel like a black hole. The analytics that Pinterest gives are pretty poor, especially over the long-term. It can also take 6+ months to see results from your efforts, especially if you’re new to the Pinterest game.

So, we’re working with the expert Pinterest team over at Simple Pin Media to see how changes to our marketing tactics on Pinch of Yum contribute to growth in traffic from Pinterest.

In this post, we’ll take a look at what the existing Pinterest strategy was for Pinch of Yum and how we’re changing it based on Simple Pin Media’s recommendations. Let’s dive in!

Pinch of Yum already had a consistent strategy for posting to Pinterest. Here’s what that generally entailed:

In general, the Pinch of Yum Pinterest strategy was relatively in-line with what Simple Pin Media recommends. However, they did suggest a few changes, which we were really excited to learn about and implement.

Let’s talk about those 8 Pinterest strategy changes a bit to break down the reasons behind them.

When it comes to Pinterest, volume really matters. The more something is saved, the more likely it is to show up in front of people.

Ideally, you’re saving as much content to Pinterest as you can – without getting flagged as a spammer. 25-30 pins per day (between both the boards you own and group boards) seems to be the sweet spot. We’re hoping to test this “perfect number of pins” with this case study over the next few months! For now, Pinch of Yum is starting out with 20 pins per day to establish a baseline and we’ll continue testing from there.

Where these pins end up is also important. Save the Pins to the relevant boards that are performing well. There’s no magic ratio for saving Pins to boards you own vs. group boards. Instead, focus on where the Pin itself is likely to perform well.

2. Save top-performers to boards every day

The Simple Pin team recommended being intentional about saving 3-5 of Pinch of Yum’s top-performing pins to Pinch of Yum boards and group boards every day.

How do you figure out what pins are performing well? Kate from Simple Pin Media recorded a podcast all about understanding Pinterest analytics that will get you everything you need to know.

3. Save seasonal pins to boards when appropriate

Recipe traffic ebbs and flows with the seasons. Pumpkin recipes are more popular in the fall, and chocolate recipes see a jump around Valentine’s Day.

To really capture these oscillating interests of cooks on Pinterest, it’s important to be serving up seasonal content. The number of seasonal pins going out to boards will vary based on the season. Some times of the year do better with more seasonal content, while other times don’t respond to it quite as much.

The high traffic seasons can vary from blogger to blogger. Some food blogs perform really well around the Thanksgiving and Christmas holidays, while family blogs might see more traffic around back-to-school time. If you’re unsure about your website’s best seasons, take a look at traffic from the past 2 years and look for higher-traffic times of year. Those are some good seasons to start with!

It’s important to make sure that your pins are going to places where they will get noticed. Group boards can be super powerful when they work… and just a waste of your precious pins when they don’t.

Finding group boards to join and knowing whether or not they are working for you is an in-depth topic. Fortunately, Kate also has a podcast on understanding Pinterest group boards that covers everything you need to know!

Saving top performers and seasonal content to boards takes care of content that’s already likely to be successful. But what about new content? That’s important, too!

New content needs a chance to be seen, so these pins get sent out to relevant boards with one day between each pin. If these start to pick up steam, we’ll rotate them in with the top performers to keep a good thing going.

For Pinch of Yum, at least one of these new content pins ends up on the main Pinch of Yum board – the board that features all of the recipes found on Pinch of Yum.

We also aren’t abandoning video, but the Simple Pin team doesn’t have a set recommended strategy for video at this point. So, we’re still experimenting with how often to save video pins. Right now, these are also sprinkled in each week, with new videos going out on Fridays.

Tailwind Tribes are groups of Pinners with similar content who get together to share each other’s pins. It’s kind of like a link party, but it’s a little more free-form and doesn’t come with any of the bad SEO implications that link parties can have.

The Simple Pin team recommended Pinch of Yum join a few Tribes to get more people pinning Pinch of Yum content in different places, which might help increase reach and, ultimately, traffic.

Popular products and ideas can result in surging interests and trends on Pinterest. Think about the Instant Pot – not such a huge deal a few years ago, but now it’s everybody’s darling. And popular Instant Pot recipes can lead to a lot of traffic if they gain traction!

Keeping tabs on these trending interests and creating boards specifically for them can be helpful in bringing awareness to that type of content on your Pinterest profile.

On Pinch of Yum, the Simple Pin Media team recommended two new boards: Healthy Comfort Food and Meal Prep Recipes. These are popular interests on Pinterest right now, and Pinch of Yum has the content to fill them out.

This one is a little difficult to get behind if you don’t have a Pinterest management team like Simple Pin Media working for you.

Tailwind’s Smart Loop feature makes it really easy to consistently schedule pins to your owned and group boards, making sure that content is regularly seen and clicked on. However, it eliminates the need to check your actual Pinterest Analytics to see what’s working on Pinterest right now.

Manually curating all pins is laborious. But, it allows you to react on a weekly basis to trending interests and seasons on Pinterest. If you see a random pin start to get traction, you can work it into your rotation more to boost the success. Pinning with Smart Loop doesn’t allow you to do that.

For Pinch of Yum, the Simple Pin Media team recommended we turn Smart Loop off completely – for the time being. In the long run, we’ll gain visibility into which pins are really top performers all year-round and use Smart Loop with strategy – not just with guesses.

Simple Pin Media isn’t against using Smart Loop – not at all! In fact, they have a course on understanding the ins and outs of Smart Loop and how to make it work for you. After we have more insight into what’s working for Pinch of Yum, we’ll use Smart Loop with their strategy to really make it work for us.

How did these changes affect traffic on Pinch of Yum?

The last month came with a lot of changes to the Pinch of Yum Pinterest account. Did it make any difference?

Before looking at the numbers, my guess was no. Pinterest is a long-term game, and any changes can take months to have an effect. But, we’re tracking numbers here, so we may as well take a look!

Here’s how January compared with the past few months:

Woah! Huge increases all across the board!

Not so fast, though. January typically comes with a huge boost in traffic due to a renewed interest in healthy eating and home cooking after the New Year. So the jump in traffic is expected – from all sources.

How did Pinterest compare, though? Total Sessions on Pinch of Yum increased 34%, but Sessions coming from Pinterest specifically jumped 57%. That’s quite the difference. So this raises a question – do people simply use Pinterest more in this post-New-Year craze, or did our changes really make a difference?

To tease this out, I took a look at numbers in Google Analytics from the past 4 years. I compared December traffic with January traffic to see if this increase in Pinterest traffic was expected, or if it was more of an anomaly. Here’s what I found:

Barring 2015-2016, which was a very good Pinterest year for Pinch of Yum (as a relative percentage of all traffic), the increase in Pinterest Sessions as a percentage of Total Sessions stayed relatively the same.

Prior years showed a similar increase in Pinterest Sessions of an additional ~10% over the increase in Total Sessions. So, that leads me to conclude that, for Pinch of Yum specifically, the changes in our Pinterest strategy didn’t have any immediate impacts.

And that’s okay, because that’s in line with what we’ve believed to be true in the past – that changes on Pinterest can take months to result in changes to traffic from your website.