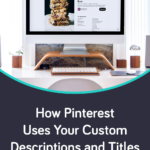 Pinterest has long used descriptions as a way to deliver relevant content to your feeds. And over the years, they’ve played around with the placement of the descriptions and even introduced Pinterest titles into the mix.

Today, we’re going to share the latest information on Pinterest descriptions and titles so you know exactly how they’re being used and where to find them.

If you’ve been on Pinterest for a while, you may be used to your Pinterest descriptions showing up at the bottom of your individual Pins or even while you’re scrolling through your feed. Remember those days? 😌

That said, you may have also noticed these very same descriptions disappearing from your Pins in the last year or so. That was no accident! Pinterest was tinkering with the way your Pins were displayed and we had a lot of you write in wondering where your Pinterest descriptions went.

Now, Pinterest has made the decision to remove those descriptions from your feeds as well as the individual Pin page. Here’s the official word from Pinterest:

Descriptions are used by our algorithm to determine relevance for delivery. We recommend entering a description to help get your Pin or ad in front of the right audience.

Okay, great. We’ve got the scoop, but what does it all mean?

The first thing you’re probably asking yourself is whether you should still add Pinterest descriptions to your images and the answer to that is a resounding YES! You can enter those through Tasty Pins, easy peasy. 👍

You may recall that Tasty Pins added the Pinterest title field a couple of years ago but at that point, Pinterest was still in the process of rolling out support for titles.

Now, Pinterest is officially supporting titles, and here’s what they have to say about them:

Enter up to 100 characters. Depending on the device, the first 40 characters may show in people’s feeds. When entered, titles will appear in the home feed or search feed. If a title is not entered and no Rich Pin title exists, nothing will show in its place in the home feed.

In other words, you’ve got up to 100 characters for your Pinterest title but only the first 40 will show up in the home and search feeds. Make sure to keep this in mind when you’re creating or editing your Pins next and don’t forget that you can easily add these in using Tasty Pins!

Even though this is the official word from Pinterest, we’re still yet to see any custom pin titles in our feed. As far as we can tell, Pinterest is still using the post title as the pin title, regardless of what we enter in the Tasty Pins title field. But… maybe things are about to change!

And that’s the official word on Pinterest descriptions and titles! Got any 🔥 burning questions 🔥 about how to use them on your site? Feel free to drop us a comment below!