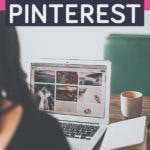 One of the most prominent aspects of Pinterest marketing is the image that gets shared. Images themselves aren’t searchable (the text that describes them is what gets searched), but a good image helps get people to click over, whereas a poor image makes them scroll on by.

Thus, making sure your best images are consistently shared to Pinterest is a key part of Pinterest success. That’s where forcing a certain image to save to Pinterest comes into play. In this article, we’ll talk about:

What does it mean to force an image to save to Pinterest?

If you have the pinit.js script installed on your site (whether manually or with a plugin like Tasty Pins), you’ll likely see little Pinterest hover buttons show up on all your images. Here’s what that looks like:

Without force-pinning (which is the default), the same exact image that the user clicked the hover button on is the image that gets saved to Pinterest. Makes sense, right?

Note: Pinterest shows a square preview of the image, but the full image does actually get saved.

When an image is force-pinned, though, a different image from the one that was clicked will save to Pinterest. For example, if “force pinning” is set for the image below, then if the hover button on that image is clicked, it won’t save that image. Instead, it’ll save the forced image to Pinterest:

Why should you force pin images?

Not all images are great for Pinterest. Even if an image has beautiful composition, perfect lighting, and the right aspect, if it doesn’t “sell” your blog post then it’s not going to be great on Pinterest.

In the example above, the shot of the hands holding the clove of garlic really is a nice shot. In terms of photography, it’s great. But does it make you want to click over to the blog post to see what it’s all about? 🤔

Some people might click, but I’d argue that the text-overlay photo is going to be more “clicky” for people on Pinterest. It tells them with just a quick glance what the post is all about and what they are going to learn.

Text-overlay images tend to do well on Pinterest, but whether or not you use them is up to you. The bottom line is that force-pinning images is a great way to put your best foot forward on Pinterest by forcing readers to save Pinterest-perfect images. 🖼️

Similar to adding the nopin attribute to your images, force-pinning can be achieved with some manual HTML or with a plugin like Tasty Pins.

To manually force-pin an image, you need to add a special data-pin-media attribute to your image HTML tag. Here’s how that might look:

When the hover button on the myimage.jpg image is clicked, then the pinterest-image.jpg is the one that will actually get saved to Pinterest.

If you’re doing this manually, you’ll have to add the attribute to every image on the page that you want to be force-pinned – just adding it to a single image won’t do the trick for all of them.

This is one of my favorite features of Tasty Pins – the ability to easily force-pin images. We use it on nearly every post we publish here on WP Tasty!

All you need to do is add a hidden image in the Tasty Pins meta box and click the box for “force pinning of the first hidden image”:

That automatically adds the image to the page as a hidden image and also adds the data-pin-media attribute to all the images when the page loads. Super easy and super slick 🤩

Should you no-pin images instead?

If an image isn’t great for Pinterest, why don’t you just add the nopin attribute to it?

Good question! I personally feel that the hover buttons on images are a subtle reminder to people to save the image to Pinterest. The default Pinterest button is small, so it’s not obtrusive and annoying. But it’s there, and it pops up when someone hovers over an image. It’s a gentle reminder.

If an image has the nopin attribute, though, that hover button doesn’t show up. So if the button only shows up on the single image that you think is perfect for Pinterest, you might not get as many saves to Pinterest (keyword: might – I don’t have any data to back this up, but it’s my general philosophy).

The nopin attribute is great for images that aren’t related to the content at all – such as images in the sidebar or in the footer, or in-content images that don’t really have much to do with the content (see the images at the bottom of the How to Peel Garlic post on Pinch of Yum).

The nopin attribute is also good if you prefer to let people pick the image they want to save, minus a few that really aren’t good for Pinterest (eg. horizontal images), and you feel that you get more traction that way.

Otherwise, if you feel that using Pinterest-perfect images for Pinterest is what gets you the best results, then force-pinning is the way to go.

Conclusion: Force-pinning is a great way to boost your Pinterest marketing

Readers generally aren’t concerned about the virality of your content on Pinterest. They just want to save some sort of image that will trigger their memory when they’re going through their Pinterest boards looking for some inspiration.

Force-pinning images is a good way to leave the subtle reminder of hover buttons on images while also making sure that Pinterest-perfect images are saved. It’s a win-win – the user gets to save your awesome content, and you get the marketing boost from them sharing an optimized image.

As the number of creators and publishers on Pinterest increases, the harder it gets to…